“There are three things I always ask people when we have a Traveller story… One, what is the source of that information? Two, is it actually truthful? Three, were there any Travellers involved in the telling of that tale? Very often, we are not involved. We all have an onus to educate ourselves and to meet each other on the common playing field of our own humanity” Oein deBhairduin 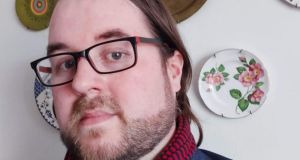 Spring is often described as the gradual waking up from Winter’s slumber, a time when our energy begins to rise again and we become more aware of the world around us. As we notice new growth in nature and bird song throughout the day, we can use this time of greater awareness to pay attention to our own words and our actions towards another person. Words, language and stories can be a powerful tool of transformative change.

Oein deBhairduin’s tool of transformative change appeared last Autumn in the form of the critically acclaimed publication ‘Why the Moon Travels’, released by Skein Press. As a brilliant educator, folk herbalist, poet and Galway Traveller man, his book captures the oral language and stories of Irish Traveller’s; beautiful collected and retold folktales of Traveller history and culture that we are privileged to hear. Each of these stories has something to teach us about our common humanity.

When he spoke with Peter Murray of the Irish Times last year, Oein shared with us “We are all made of stories… he shares “one of the symptomatic things around Travellers is that we’re researched and considered and analysed, and sometimes people actually know nothing about our culture, only the issues we experience. When I was a child I benefited so much from these stories, they’re part of how I see the world. I wanted to share that with people from the wider community and say, ‘Here are some things you’ve never known about us, and they’re beautiful.”

In the spirit of story-telling and to encourage the type of conversations that inspire anti-racist action in March, the Yellow Flag Asks series spoke to youth leaders and intercultural educators for their opinion on how schools can take a visible and proactive stand against racism? Collectively on social media, they highlighted the need for robust school policies to deal with racism; the importance of visibly promoting anti-racist policy in the school environment and how we must become aware of our own personal bias’s and be willing to change our perspective on how we see ourselves and others. Schools should be a place where all cultures and ethnicities are heard and spoken about; visible and celebrated; where we realise the power of our words and actions towards another. Each contribution delivered to the Yellow Flag Asks series can be viewed as its own transformative story, if we are willing to listen.

Yellow Flag Asks series is available to view on Twitter @YFProgramme To view the article where Peter Murray speaks with Oein deBharduin on the publication of his book ‘Why the Moon Travels’ click https://www.irishtimes.com/culture/books/if-you-are-nomadic-your-songs-and-tales-become-national-1.4345915